Late February of this year, I had the extreme treat of visiting Iceland for a little 5 day adventure. While aimlessly browsing social media, I happened upon a seat sale from Wow Air to fly return to Reykjavik for $250 each! How on earth could I pass this up? I didn’t 🙂 A short month later, our bags were packed and we were en route to beautiful snowy Iceland.

Typically, I’m alright with the cold and I love snow but when you rent a teeny tiny car two days after a record February snowfall, I have to admit that I was slightly worried.

After an all nighter and a smooth flight, we arrived at 5am. Our first order of business was to grab our car and drive around the city until it woke up. 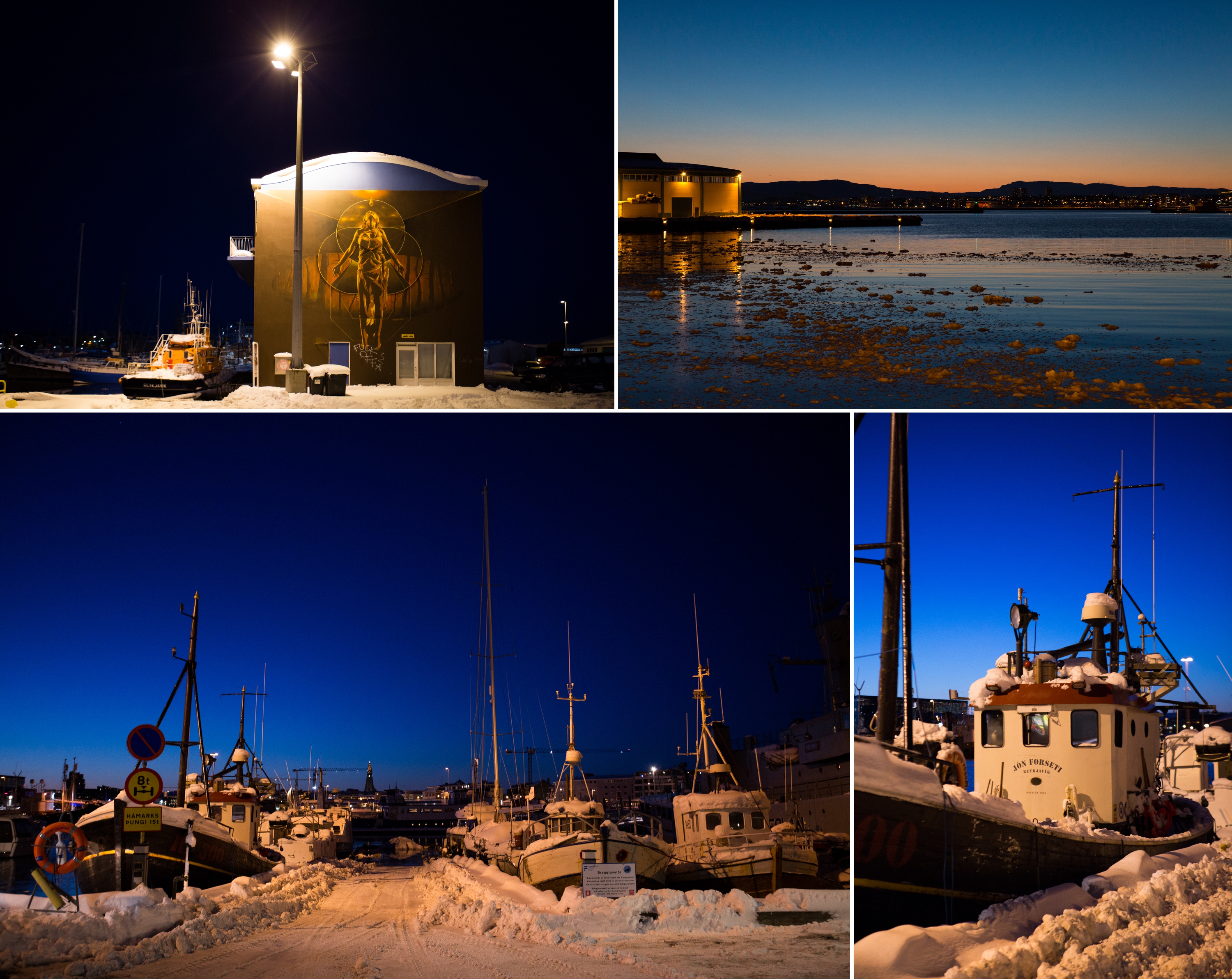 Exhaustion after skipping sleep was quickly replaced by excitement and we decided  to tackle Reykjavik. The city was blanketed in snow, the sun was shining and it definitely wasn’t Toronto style February cold.

Our first order of business was to see the famous Hallgrímskirkja Church. The amazing pillars were designed after the beautiful basalt rock stacks seen on the black sand beaches of Vík, my most anticipated part of the trip which we visited on Day 2.

The church organ boasts over 5000 pipes and sounds incredible. We sat for the better part of an hour just listening to the baroque organ music being played before we took the elevator up to the observatory deck for a beautiful panoramic view of the city. 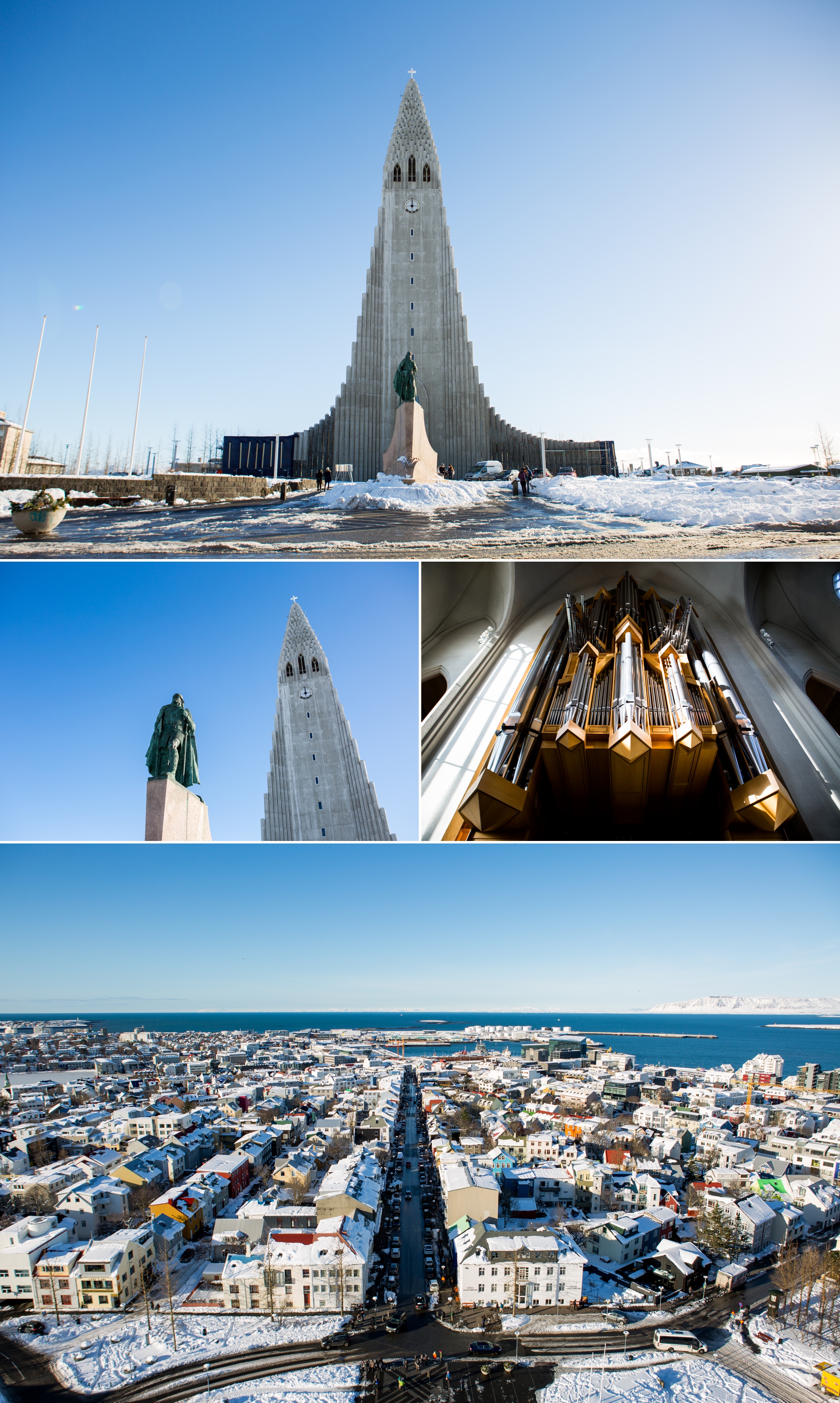 The evening couldn’t have finished in a more prefect way with our front row seats to the Northern Lights from our bedroom window. Bucket list check! 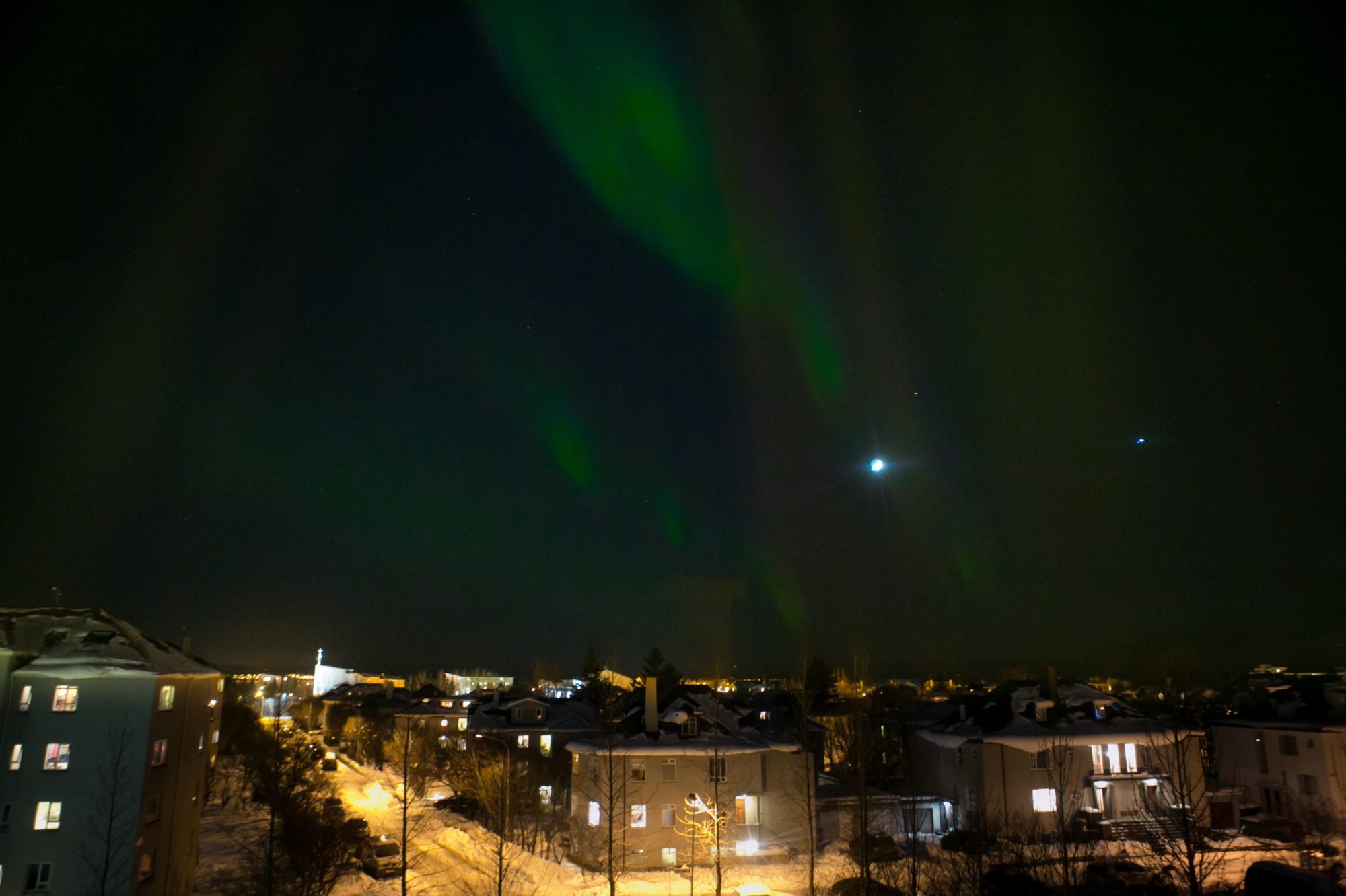 Off to an early start, we were about to start our most anticipated trek of the trip, the road to Vík for a self-portrait photoshoot and back. For those of you visiting Iceland for a short adventure, make sure to book a day for this drive, it is not one to miss.

We were specifically warned by our car rental company NOT to park on the side of the road to take pictures. They are all mostly 1 lane highways and I really don’t blame them, especially in the winter. However, when 4 cars in front of you stop to take this picture, I was absolutely itching to join them, so I did. No regrets here, that view was absolutely stunning. Little did we know that the next few vistas were even more breathtaking.

The first view of Reynisdrangar and the sea stacks. 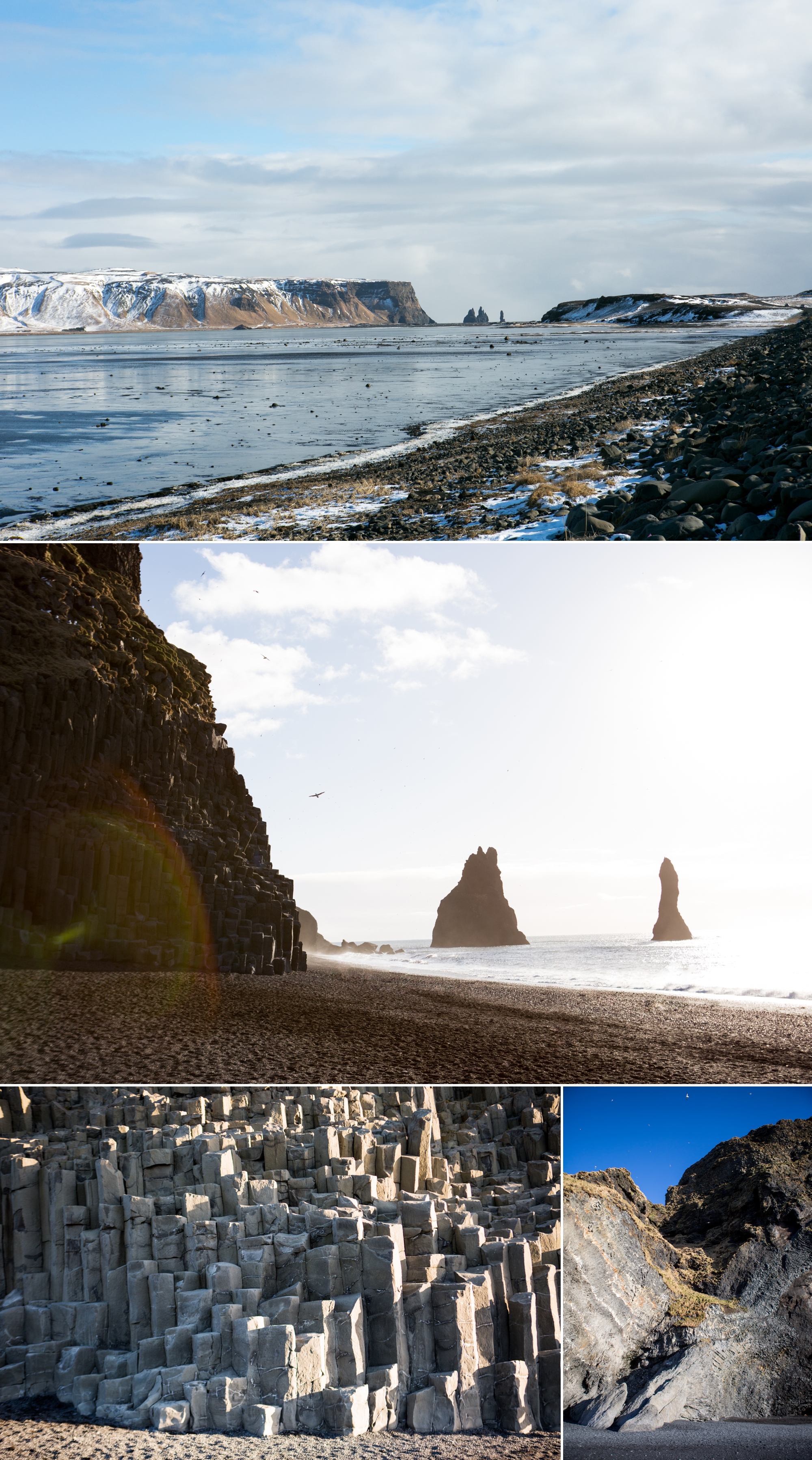 We were consistently blown away by the tiniest of details from the hexagonal basalt columns, the black sand to the layered rocks of these amazing cliffs. 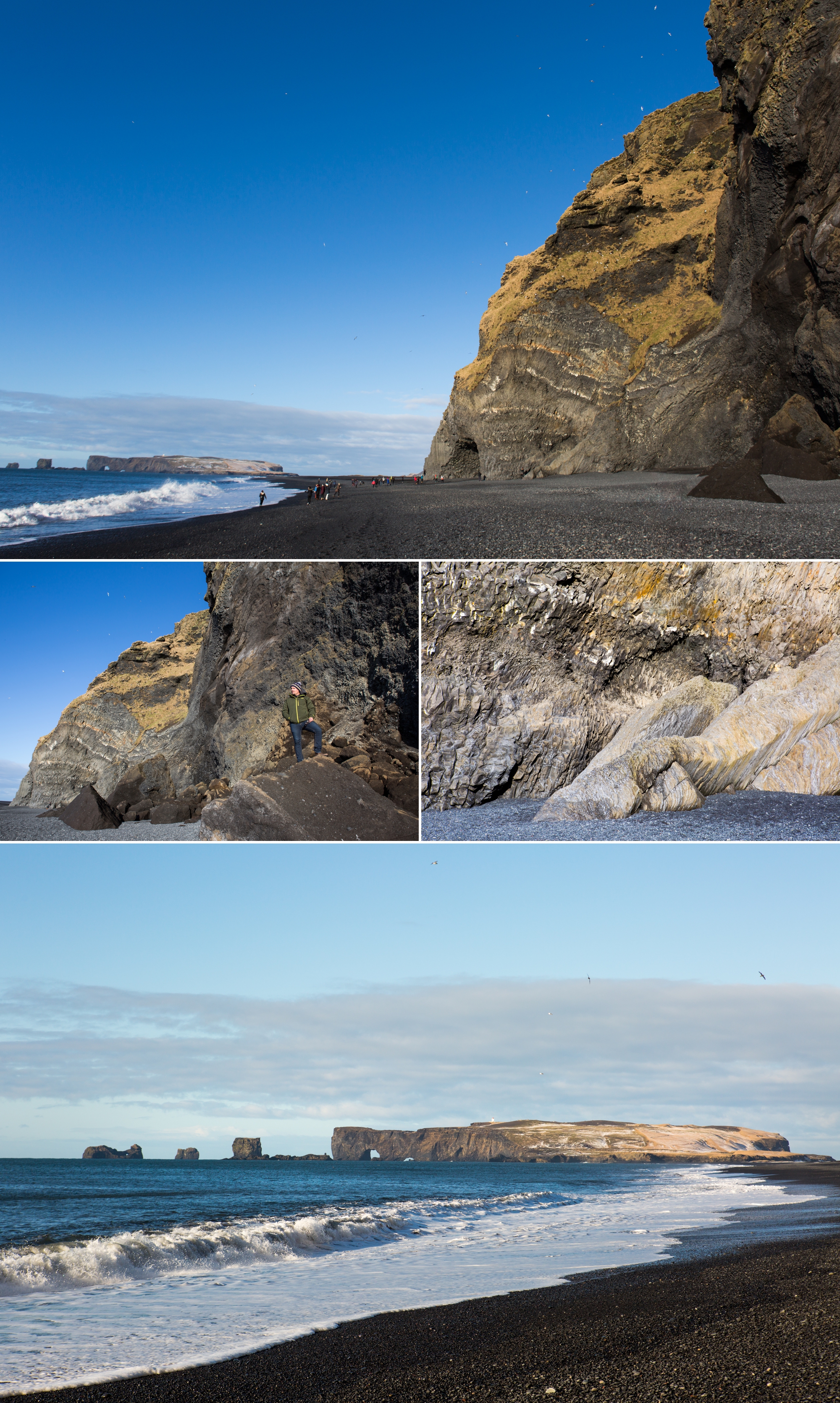 This photoshoot experience was one for the books. The beach was packed with tourists, including ourselves and everyone was well layered for the windy cold beach … except for me during these photos. Adrenaline is a funny thing though because I really didn’t feel the cold until we were finished thankfully. Check out the full shoot HERE.

Remember when I said that the first view was about to be trumped? Well, here is our next one, the beach we were just on from the top of Dyrhólaey.

Note for photographers: DSLR selfies are still probably more in focus than asking someone to take a picture of you with said giant machine of a camera.

Every now and then I caught myself catching flies … ok not literally but definitely staring open mouthed at landscapes that looked like they were from another planet. Just gorgeous!

Oh, and I climbed things because photos 🙂 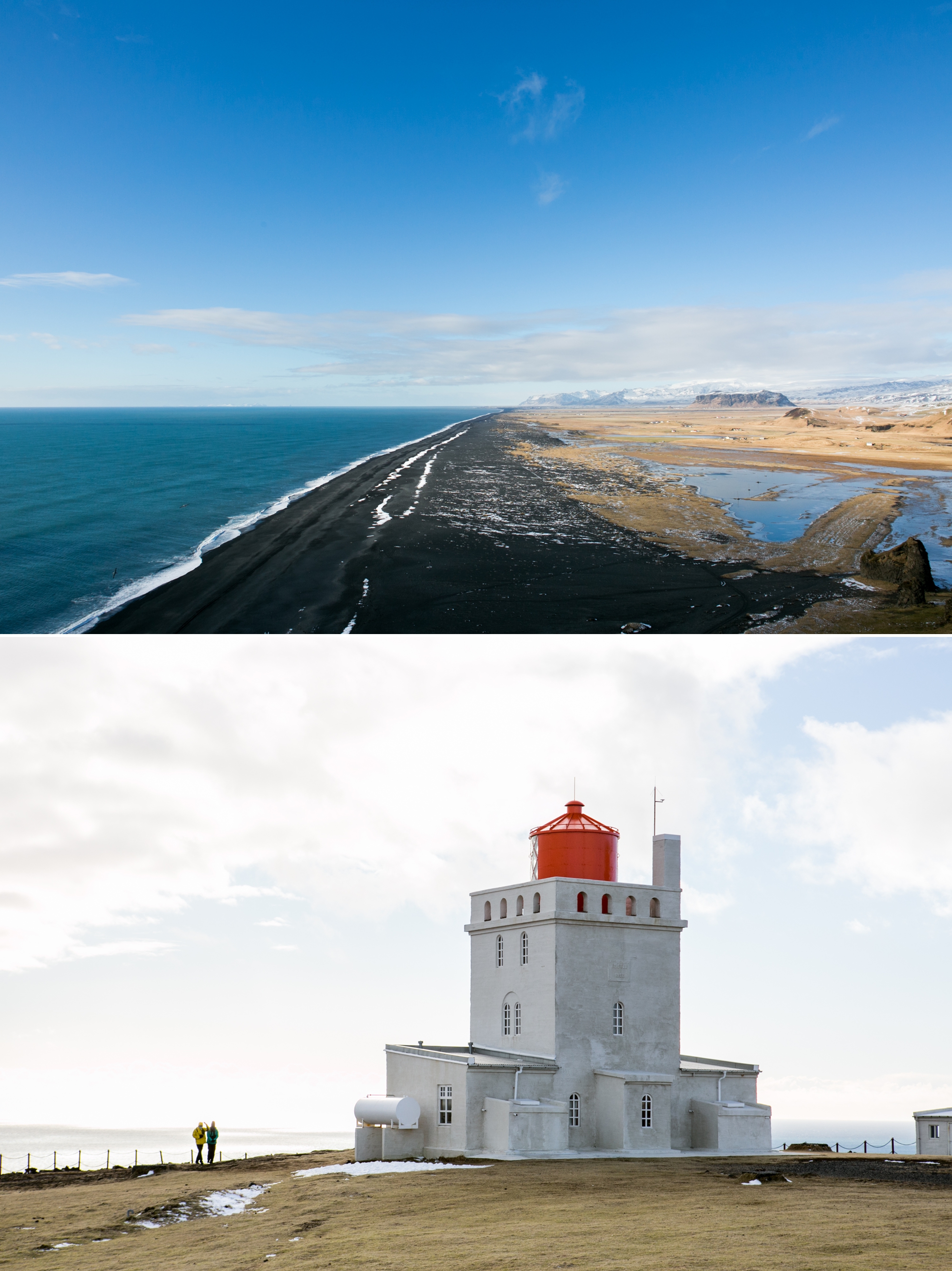 A view of Dyrhólaey. If it wasn’t winter, I would have absolutely tried to get out onto that peak, at least in my mind anyways. 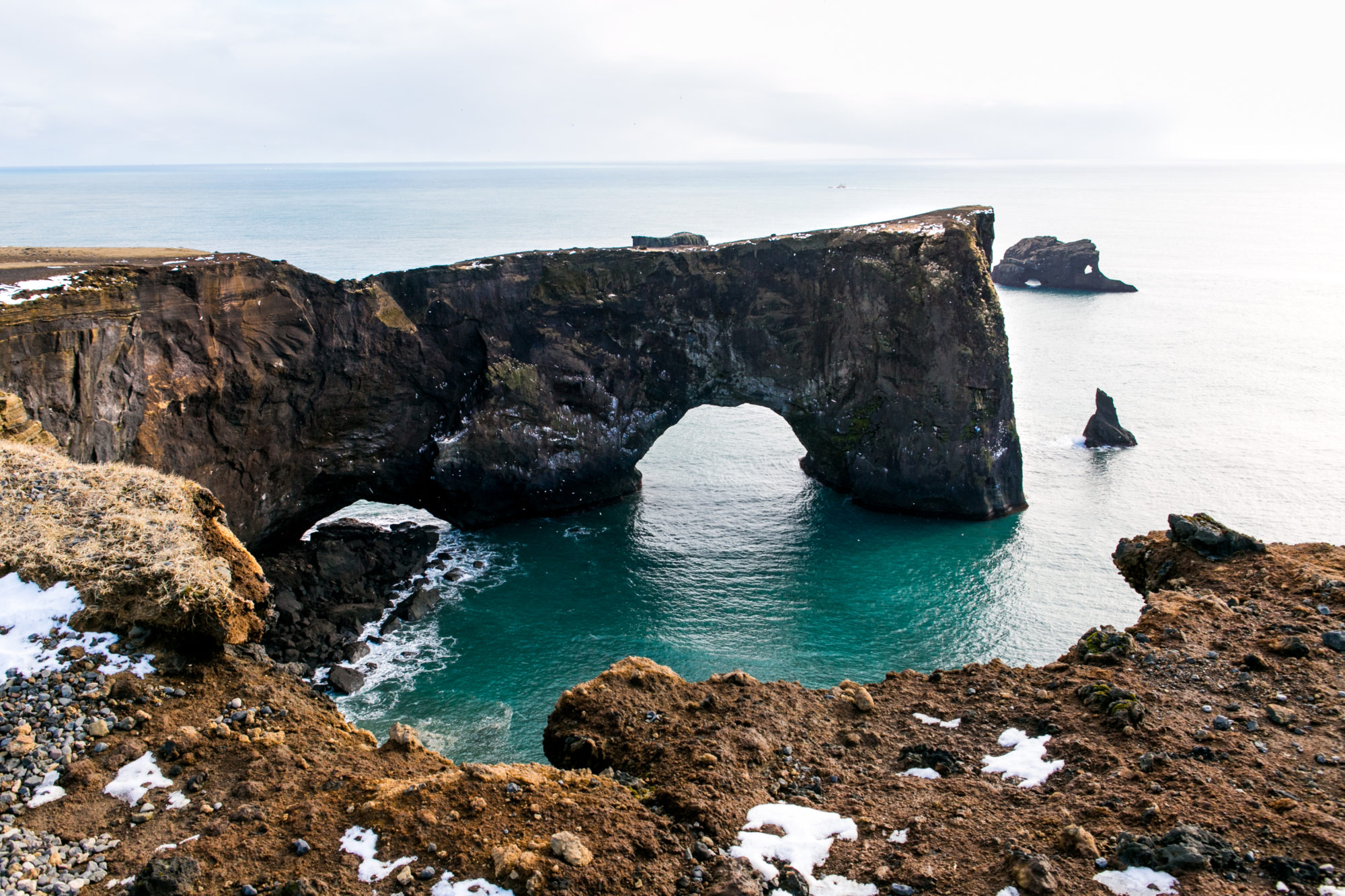 Our drive down and we were already pulling over on gravel switchbacks so I could get a panoramic of this. Spoiler alert, we came home safe and sound and didn’t even get honked at.

Our next portion of this drive was scoping out waterfalls. One of the brilliant things about Iceland and this drive in particular was that the sights we set out to see were all very accessible. You can see most of them right from the road. The downside is that there are tonnes of people doing the very same thing.

Here is a look at Skogafoss. 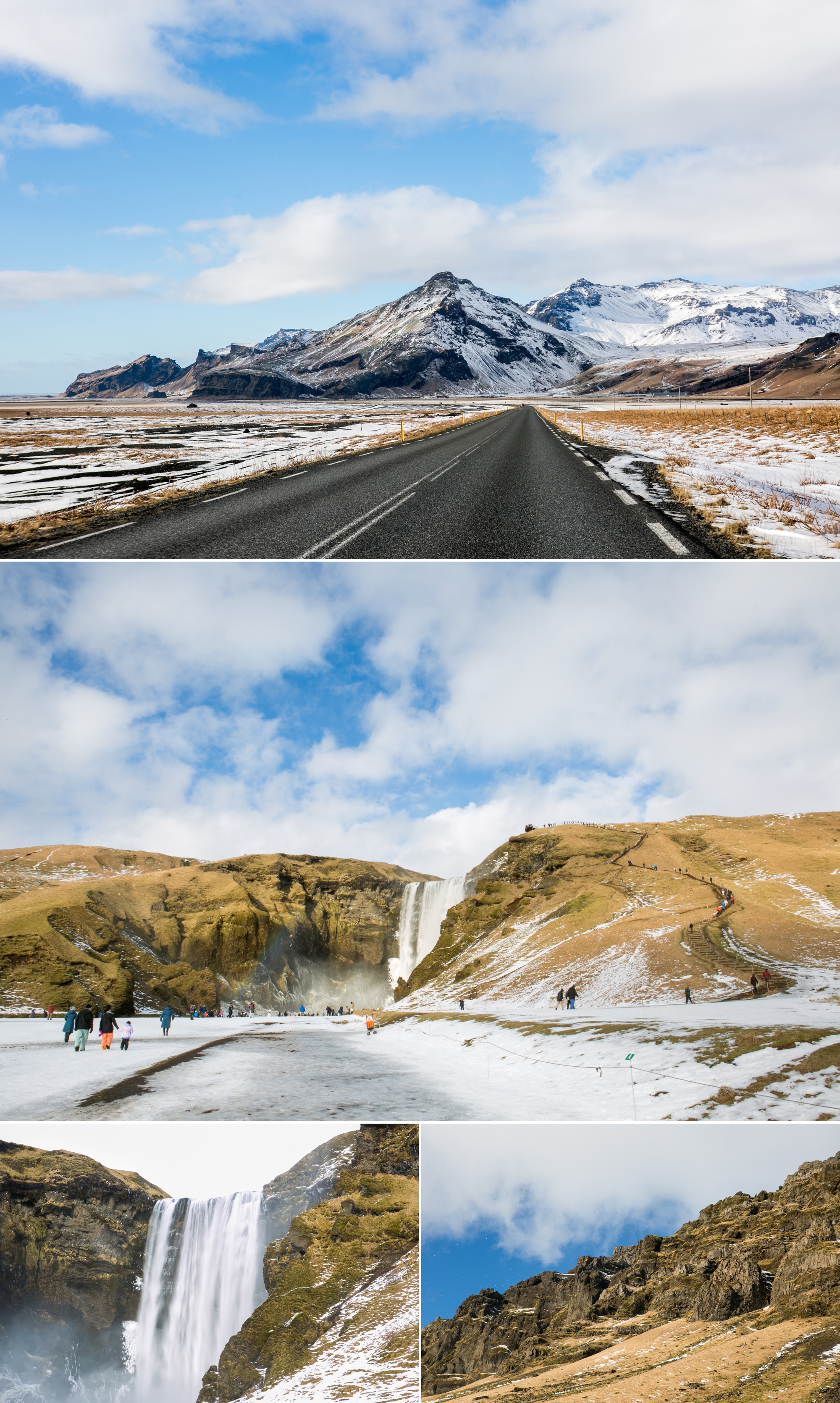 Seljalandsfoss, the next waterfall on my list was there mainly because technically you can walk behind the falls. Not in the winter though, the spray had frozen on the steps and walkways that lead back there. It did make for a highly entertaining experience of watching people who were just determined to get there. None got close, instead they took the ice slide right back to the starting point. Oh well, looks like we’ll all just have to come back in the summer. 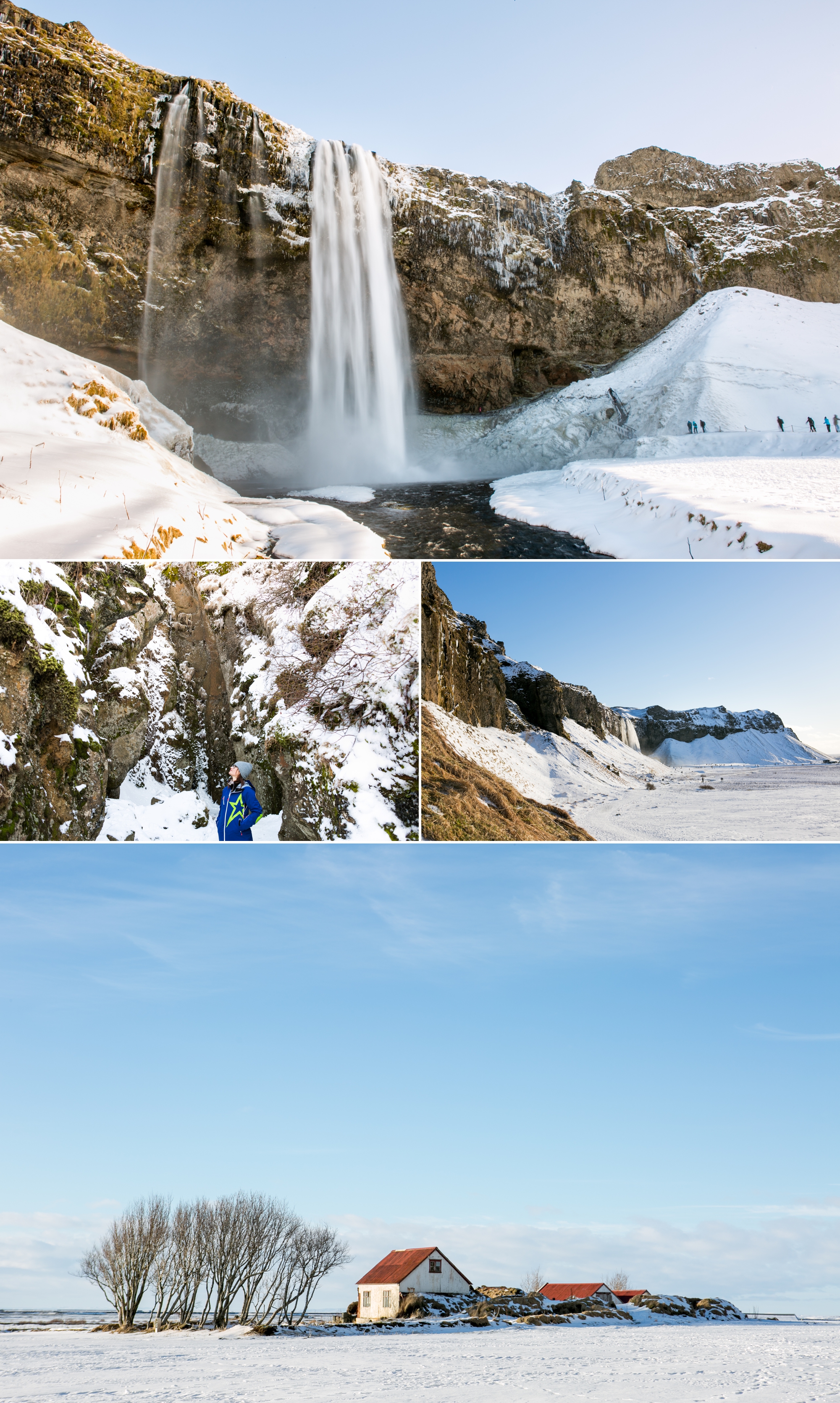 For our second full day of road tripping around the island, we decided to see the Golden Circle. It’s a loop on the interior of the island close to the west side. The whole drive with stops was probably around 8 hours.

It’s really amazing that during the same weather in a slightly different part of the island, the scenery was vastly different. Here we were surrounded at first by a complete winter wonderland. Vast open snowy fields followed by snow capped mountains and tiny isolated villages and towns.

Our first stop was Þingvellir (Thingvellir) National Park, famous for their site of the Icelandic Parliament in the 10th century. 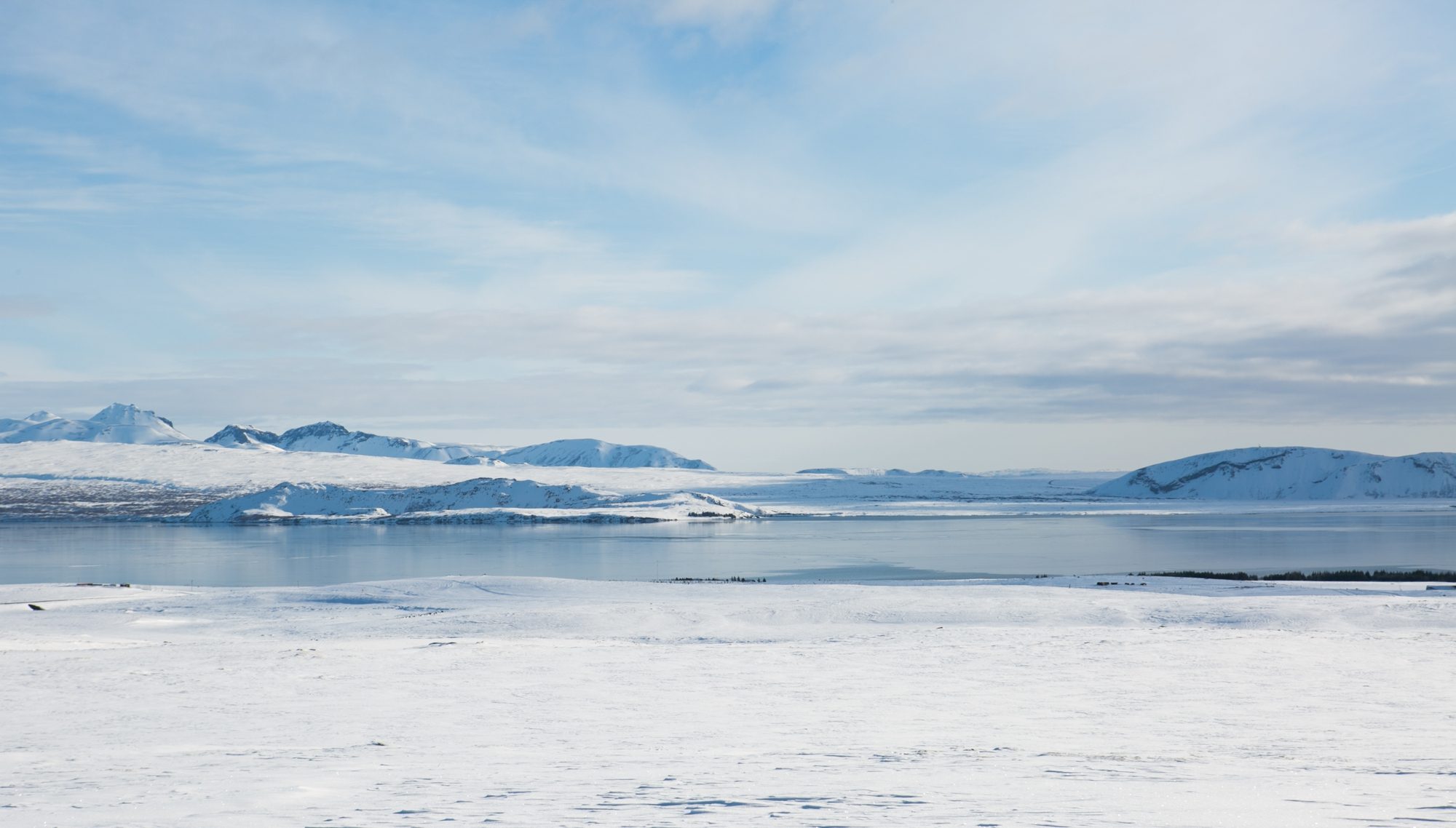 Just in case we needed reminding, it was cold. What a better way to drive that point home than to watch scuba divers in freezing cold water. Just why? 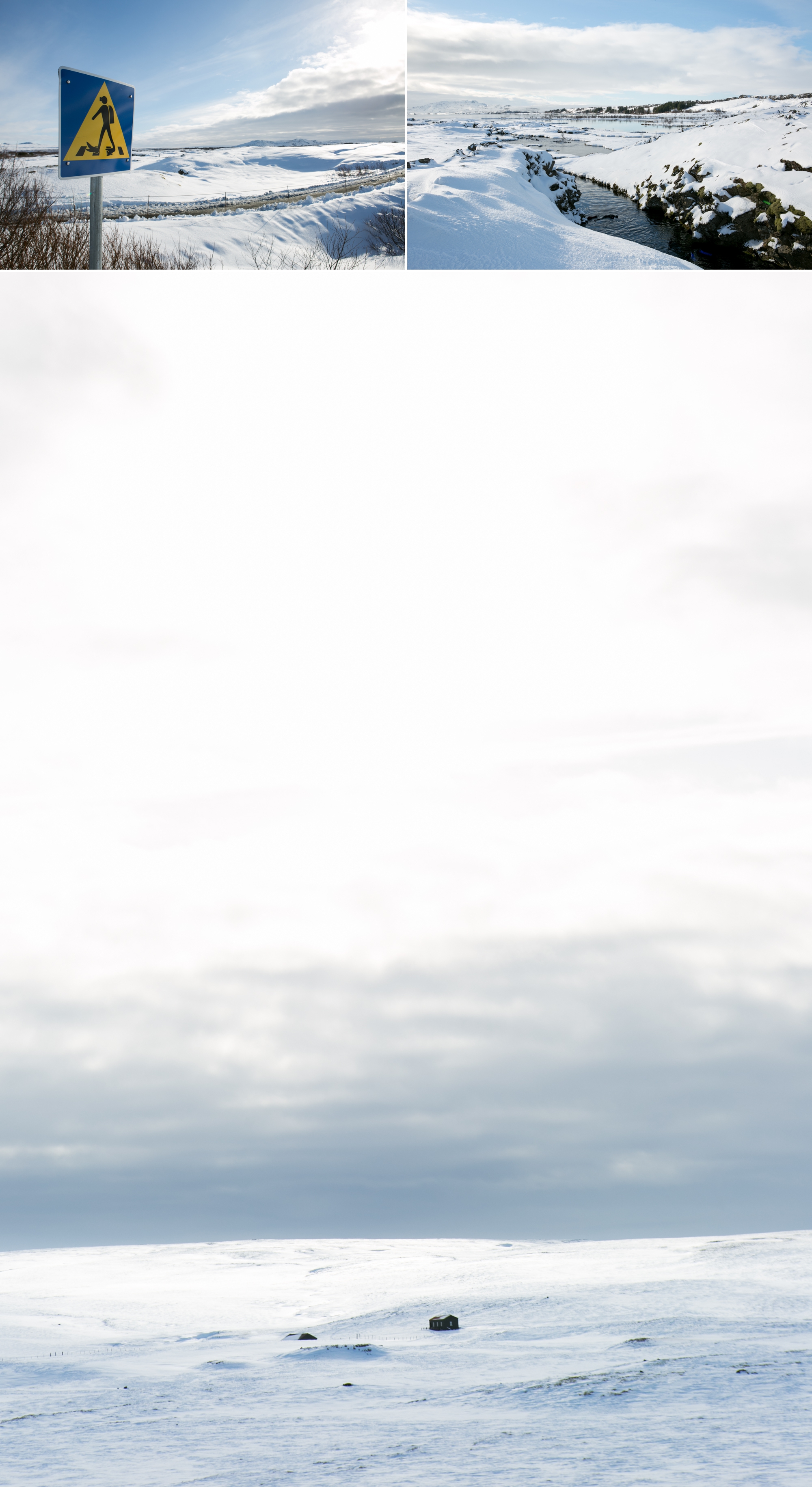 I had mentioned earlier that all of the sites were relatively easy to get to and could be seen from the road. This one was a bit off the beaten track. During our confusing drive to get there, we stumbled into residential areas with winding and confusing directions, google maps just wasn’t as good of a help as it usually was.

But we made it to Bruarfoss and it was spectacular. Note for the photographers out there, if you want to get those gorgeous smooth waterfall images, don’t forget your ND filters at home like I did. 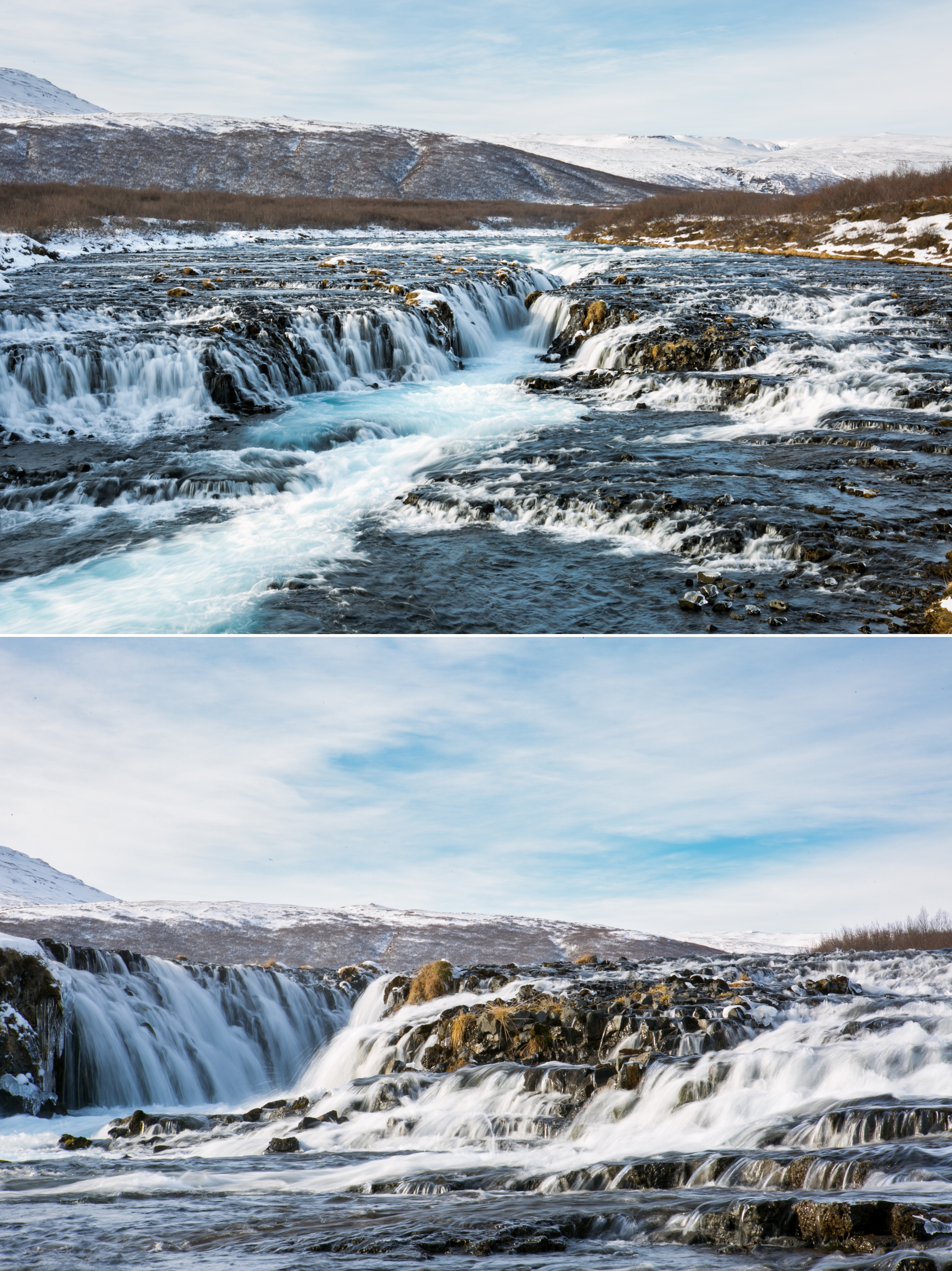 Our next stop was Geysir National Park, one of Icelands many spots to see it’s geothermal smoking and erupting grounds. 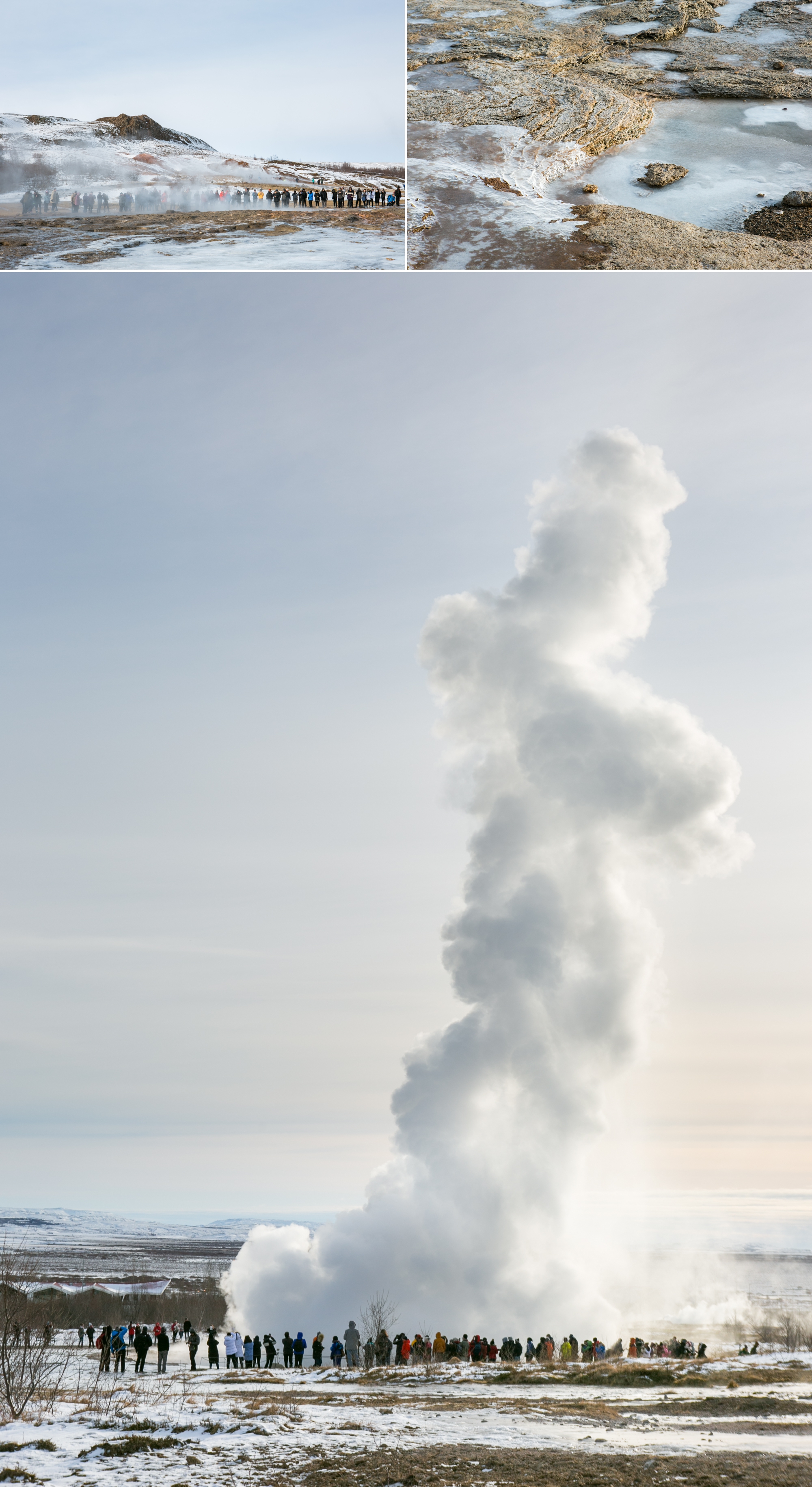 Last but not least, our final stop of the Golden Circle was probably the most overwhelming. This is Gullfoss. Just to understand the sheer size of this waterfall, take a look to the top left of the photograph, those are ants (people) for scale. 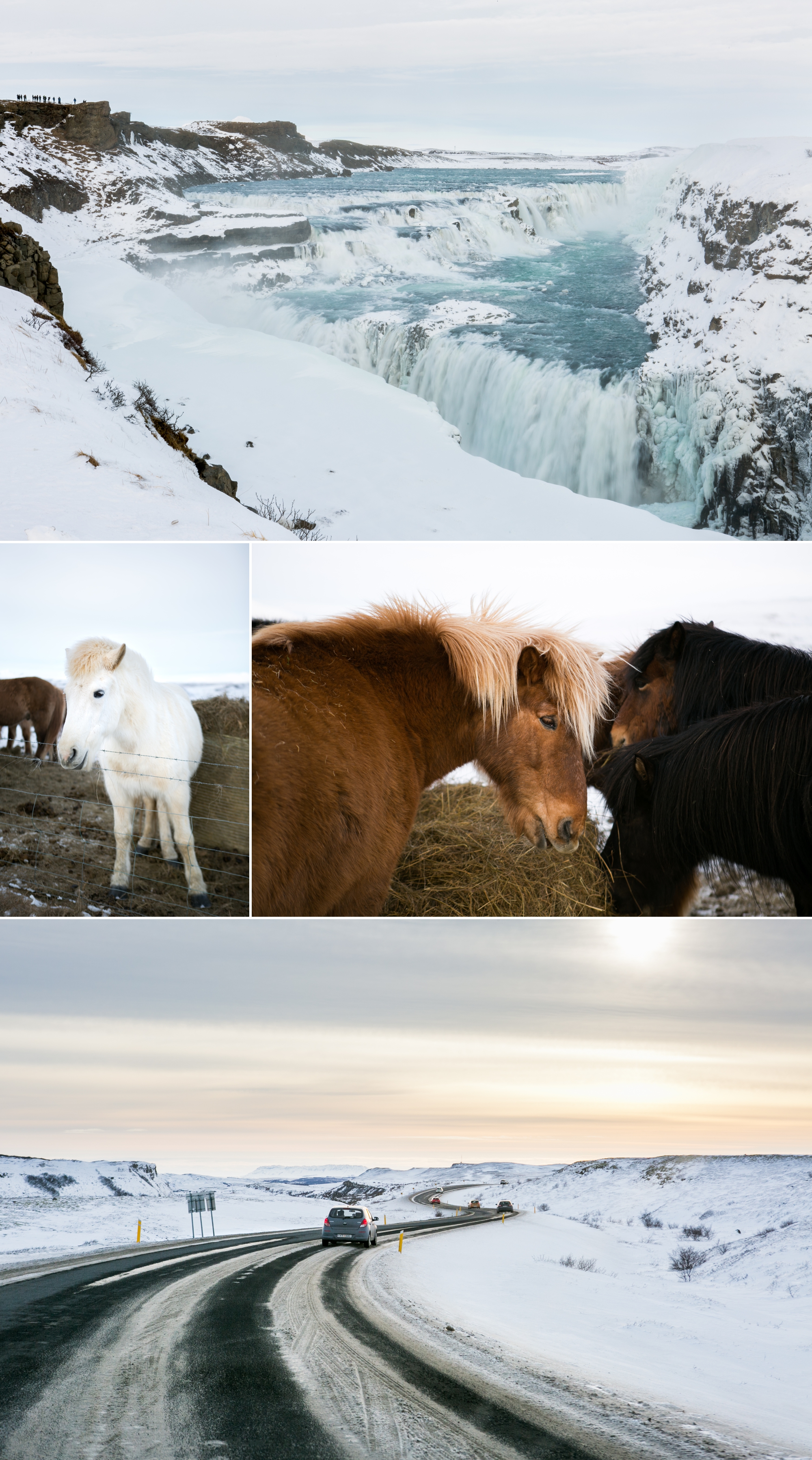 We made it home just as it got dark. The sunrises and sunsets in this country are magical. This experience for me was one that I had been wanting to do for some time now and it absolutely lived up to my very high expectations.

If you are thinking about going, stop thinking, get on the internet and search WOW air for flight deals and get there. Make sure you have the gas station hot dogs (no joke, they are amazing and cheap) and probably skip the putrified shark meat but do try Black Death (caraway flavoured brandy). Rent a car and experience the natural beauty!

It is truly breathtaking. 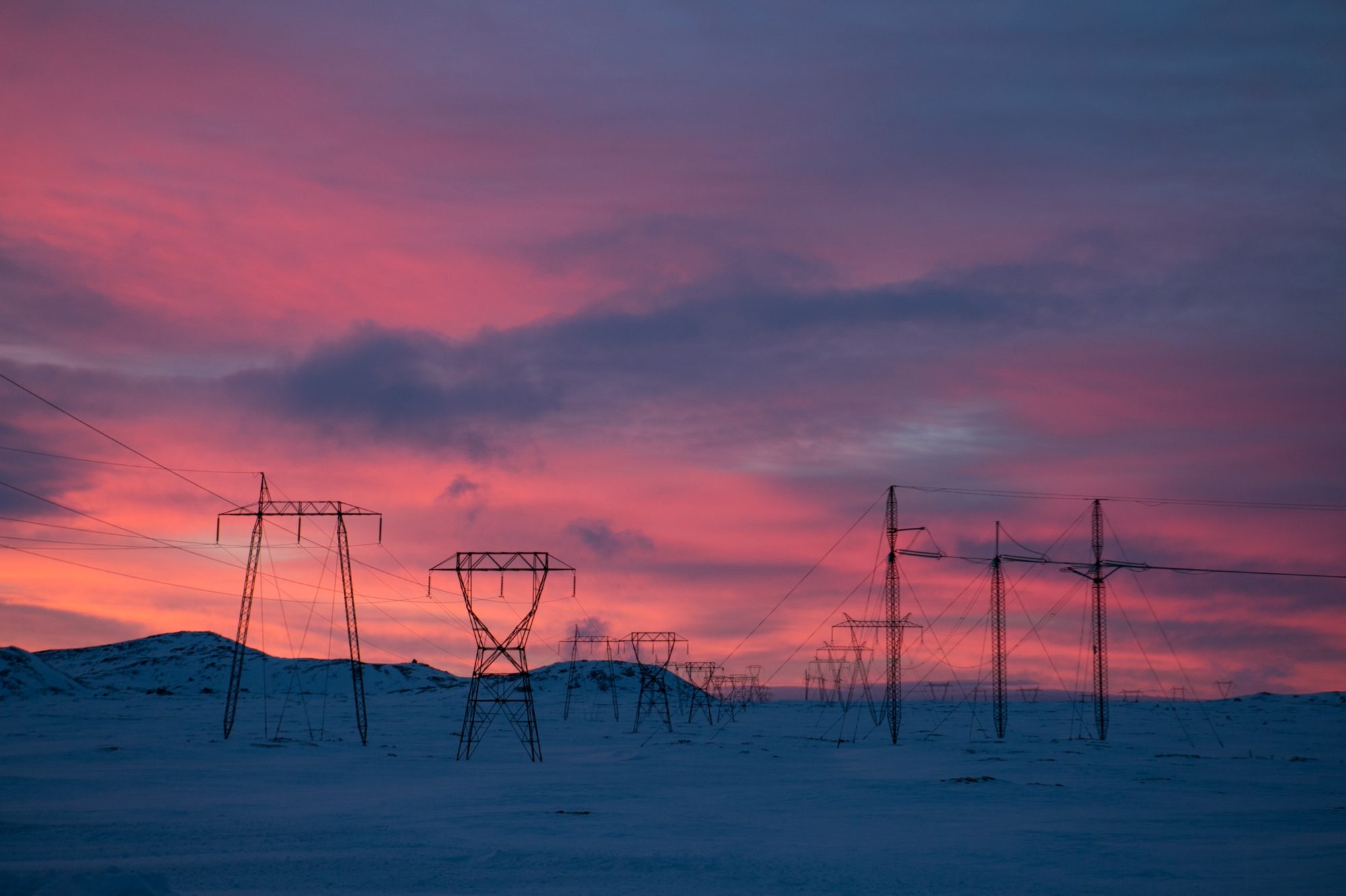 Self Portrait Photoshoot in Iceland

Beautiful photos! Iceland is high on my list – I want to rent a car and drive around the entire island when we have the time!

Thanks Samantha. It’s an absolute must! Car rentals are pretty cheap too.

ARG I want to get on a plane RIGHT now! These photos are AMAZING! I love your breakdown and suggestions, thanks for sharing!

Thanks Riva, you should goooo! 🙂

What a wonderful trip!! These photos are amazing!